We are seeking a Land Stewardship Program Associate to join our nationally accredited land trust. This full-time position is based out of our Greenville office, with the opportunity for remote work, and field work throughout Upstate SC. 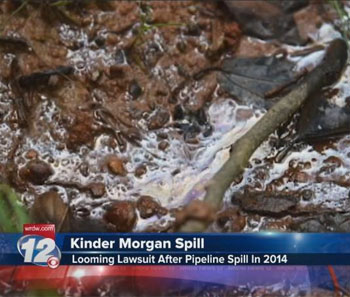 Almost four years later, the petroleum plume is expanding, the neighboring creek is still being contaminated, and Kinder Morgan still has not recovered a significant portion of the petroleum that is evident in their monitoring wells.

After the suit was filed, Kinder Morgan re-started its product removal, submitted a Corrective Action Plan to DHEC, and began the process to begin other remediation efforts at the site, including biosparging and installing a “bubbler” in the creek to speed up the break down of the petroleum. This appears to have been ineffective in reducing the contamination and preventing plume migration.

Kinder Morgan filed a Motion to Dismiss this suit and SELC’s response on behalf of Upstate Forever and Savannah Riverkeeper can be read here. In April, a District Court Judge dismissed the case for erroneous reasons.

Recent test results indicate that pollutant levels in Brown’s Creek still far exceed safe levels. Upstate Forever and Riverkeeper checked up on the site on May 11, 2017 and saw several areas of concern, including tree die-off over the seep, a petroleum sheen in the creek below a containment boom, and stressed groundcover in an area where contaminated groundwater may interface with the creek downstream (away from the seep).

SELC appealed the dismissal on our behalf to the 4th Circuit U.S. Court of Appeals in mid May, and oral arguments were heard on Thursday, Dec. 7, 2017.

On April 12, 2018, the 4th Circuit released its 2-1 decision in our favor on the appeal. This case will likely set precedent and has drawn national attention. You can read the decision and the briefs filed in the appeal below (PDF format).

On May 30, the Court denied Kinder Morgan's Request for Rehearing. Kinder Morgan appealed this decision to the U.S. Supreme Court in late August of 2018. The case name is Kinder Morgan Energy Partners LP v. Upstate Forever et al, number 18-268 in the Supreme Court of the United States. Read the Law360 article about the case