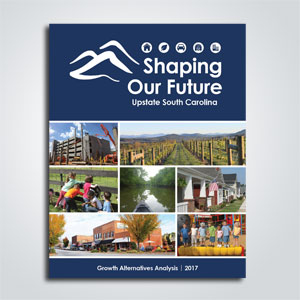 If the ten-county Upstate region continues on its current low-density land use trajectory, the amount of land consumed by 2040 to accommodate the 300,000+ new residents projected for the region could more than double, according to a study released recently by Upstate Forever, Ten at the Top and Furman’s Riley Institute.

The study suggests that if land use trends continue, government’s cost to serve newly developed areas will increase dramatically over time, and expected revenues will likely not cover half of the projected costs. Specifically, costs for government services across the Upstate including water, sewer, roads, transit and police & fire protection could climb to nearly $650 million/year by 2040, while anticipated revenues to support those costs are projected to be less than $260 million/year by that time.

The findings of the study were presented at the Shaping Our Future Forum, an event hosted by Ten at the Top at the BMW Zentrum on May 25.
The study – known as the Shaping Our Future Growth Alternatives Analysis – used scenario planning tools to evaluate the relative land use and fiscal impacts of the region’s ‘business-as-usual’ scenario as well as three hypothetical alternatives that could potentially occur over the next 25 years if communities change course in terms of land use.

The three alternatives included an extreme example of compact development (Compact Centers); a scenario that focused most new growth on major corridors (Major Corridors), and finally, a pattern of growth that steered new development to many ‘rural village nodes’ as well as major city centers across the region (Rural Villages).

Upstate Forever Executive Director Andrea Cooper, who served on the project’s steering committee urges communities to take notice of the study’s findings, “The Upstate is currently on course to becoming the next Greater Charlotte or Greater Atlanta. The findings of this study are critical tools that community members and elected officials can use to encourage more informed dialogue about growth and its impacts and begin taking action to manage growth in a way that protects the region’s character and natural heritage as well as citizens’ quality of life.”

The study was guided by a diverse steering committee representing the economic development and business community; utility and transportation providers; elected officials; local farmers; and the public health and nonprofit sectors, and a technical advisory committee made up primarily of local planners from around the region. It also relied on a focus group series and the findings and community feedback collected through a number of past efforts.

“Gaining a better understanding of the impacts resulting from our current development pattern versus potential alternatives was a logical next step stemming from efforts over the past decade to encourage discussion about land use and development in the Upstate. Through efforts like Upstate Reality Check and Upstate Shared Growth Vision, more than 15,000 people in our region have shared concerns about our current pattern of sprawling growth and ideas about how we could and should grow. This study helps us gain more clarity around the impacts of our current path and why it is important now to support communities and leaders who are trying to grow differently,” says Ten at the Top Executive Director Dean Hybl.

The study was conducted by an award-winning consultant team led by the Charlotte-based firm City Explained in conjunction with Asheville-based Urban3 and Stantec and was made possible through the generous contributions of Hollingsworth Funds, Ten at the Top, Furman’s Riley Institute, the Greater Greenville Association of Realtors, New Belgium Brewery, Duke Energy/Piedmont Natural Gas and Upstate Forever. The City of Greer sponsored the Focus Group Series.

Learn more and access the full study at www.ShapingOurFutureUpstateSC.org.