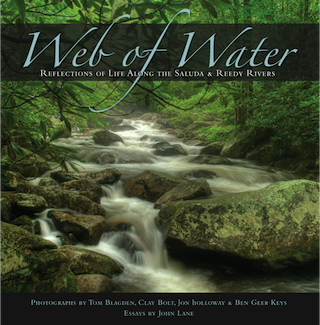 Web of Water: Reflections of Life Along the Saluda and Reedy Rivers is an award winning book that takes you on a journey through the Saluda-Reedy watershed, which has been a major focus of Upstate Forever’s work since 2003. The trip that unfolds through a collection of essays by John Lane and the fine-art photography captured by photographers Tom Blagden, Clay Bolt, jon holloway, and Ben Geer Keys.

Located in one of the fastest-growing regions of the Southeast, the Saluda-Reedy watershed reaches from the Blue Ridge Escarpment along the North Carolina-South Carolina border to Buzzard’s Roost dam on the Saluda River and Lake Greenwood. Nearly 400,000 people live, work, and recreate here in an area encompassing more than 1,500 square miles—and for good reason! Full of natural beauty and rich in biological and historical significance, the Saluda and Reedy Rivers and the spectacular 11,400-acre Lake Greenwood are sources of drinking water, tourism, industry, and cultural significance for the Upstate and for much of the state.

Consisting of images collected entirely in the Saluda-Reedy watershed and printed here in South Carolina, this book illustrates the single element that connects our natural resources to our culture, heritage, and quality of life—water! One hundred percent of the proceeds from the sale of this book will directly benefit the continued work of Upstate Forever on the Saluda-Reedy watershed.

In 2015, Web of Water was nationally recognized by the Printing Industries of America with a 2015 Premier Print Awards Certificate of Merit in Art Books.  It also won the 2014 “Best of Category” award in Hardcover books from the Printing Industry of the Carolinas.

The book is available for purchase at Upstate Forever's offices and at select retailers. Contact us at info@upstateforever.org to learn more.

Tom has been a professional photographer for more than thirty years. His photographs have appeared in most national conservation calendars, as well as in numerous exhibits and magazines, including the covers of Smithsonian, Audubon, Outdoor Photographer, Nature Conservancy, and Sierra. Tom’s photographs and writing are devoted to land protection and conservation issues, resulting in six books on South Carolina.

Clay is a natural history and conservation photographer specializing in macro and close-up photography of Southern Appalachian biodiversity with a focus on invertebrates, reptiles, and amphibians. His images and projects are regularly featured by organizations such as The Nature Conservancy and National Geographic.

jon’s professional career has allowed him to travel the globe, creating photographic exhibits on South Carolina, India, South Africa, Cuba, Gates of the Arctic, 500 Years: Native America, Spirit, Solitude, and Nature’s Rhythm as a testament to his artistic vision. He lives and has a studio in Greenwood.

Ben is a lifelong resident of Greenville, South Carolina. He acquired a love and a fascination for the beauty of the mountains and, after years of hiking the trails in the Southern Appalachians, he has accumulated many photographs of the area and enjoys sharing them.

John is an avid paddler and place-based educator, whose outdoor adventure prose has appeared in Outside, American White Water, Canoe, South Carolina Wildlife, and many other periodicals. His long essays, “River Wild” (on paddling fifty-nine miles of the Youghiogheny River) and “Confluence: Pacolet River,” appeared in the anthologies Heart of a Nation and Adventure America, both from National Geographic Books.