This is an excerpt from the Spring/Summer 2022 issue of the Upstate Advocate, Upstate Forever's twice-yearly publication. To read a digital copy of the complete publication, please click here. 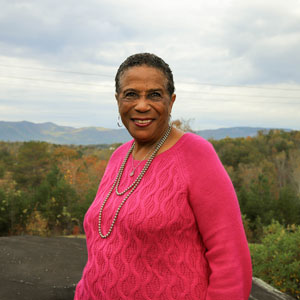 I was born on Liberia Road in Pickens County, two doors down from Soapstone Baptist Church, and I grew up there. This area was first settled by Native Americans. Of course, they were run off the land and later, 600 freed slaves came to the area.

My great-great-grandfather was among those freed slaves — his name was Joseph McJunkin. He started a church there. At that time, there was no money to build a church. He cut down trees and created a brush arbor, and they would have services under it. He named it Soapstone, after the rock found across the land the church sits on. As time went on, they planted the cotton and other plants. Those 600 pooled their money together, bought lumber, and built the original Soapstone Baptist Church.

I was baptized in that church when I was ten years old. Shortly after that in 1968, it was burned down by Ku Klux Klansmen. But my parents had a big farm, and sold so many vegetables, they were able to rebuild and open the church as it stands today within one year. It was remarkable.

When the freed slaves came to Liberia in 1865, they also developed the slave cemetery on the property. I had heard my parents talk about it when we were younger, and us kids would ask them to take us to it. They said it was too painful. They couldn’t do it. We knew it was somewhere on the six acres, but never knew where.

I had a land surveyor come out. He told me he found the graves nestled in the woods. About two weeks after that, I sent a letter to all our sister churches in the community asking for help — chainsaws, bulldozers, whatever means they had to help cut away everything that had grown up there. I said, “If you come and help me at 7:30 on Saturday morning, I’ll make you one of the best lunches you’ve ever had.”

Sure enough, I had 35 people show up that morning. They worked until 12 o’clock and still hadn’t gotten to a grave. I gave them a nice lunch as I had promised. I asked if we could schedule another date to work and they insisted on going back out there. “We’re going to see at least one grave before we leave today,” they said.

At 3 o’clock, I heard clapping. Everyone threw down their shovels and saws and took off running. They’d found a grave!

Now the cemetery has been cleared out, and there’s a cul-de-sac and beautiful entranceway and shrubbery. I just felt so compelled to give those slaves some dignity and be a voice for them.

When my mother became paralyzed from a stroke, I came out of work to take care of her and my dad. One particular day, I asked what she wanted for breakfast. She said, “I don’t want breakfast today, but I’ve got two favors I need from you.”

The first favor was to bring my oldest brother back to the family house. Then she asked me to take her hand — she squeezed it so tight — and said, “Do not let the doors of Soapstone Church close. Promise me you’ll continue to carry out your great-great-grandfather’s legacy. Continue to care for what me and your dad did to rebuild the church.”

Three days later, the angels came and she left us.

People ask me how I came up with doing the monthly fish fry and stuck with it for so long. My mother’s driven spirit helped me do it. I had to do it.

I kept the promise I made to her. I started a monthly fish fry with the money raised going toward paying off the church’s debts. It was 22 years into the fish fry when the bank called and said, not that we were behind or anything, but that they needed $50,000 or we would lose the church.

Then, a few things happened. Eating Well magazine contacted me. They’d heard about the church and the fish fry. They wanted to send their food critic here.

Investors started contacting me then, too, offering to take me to the bank and pay the $50,000 off. They were coming out of the woodworks. Where the church sits, there’s a picturesque view of Caesars Head and Table Rock. People wanted to turn it into a neighborhood or a resort. That was when I started to get really serious about conserving this land. The more these investors would come in, the more I was driven to protect it.

The Eating Well feature went international, and we started getting checks from London, Belgium, all over the world. We were able to pay off the mortgage on the church within a couple months.

Now I’m working with Upstate Forever and others on the conservation easement so Soapstone Baptist Church can and will always be a historic site, even when my time is up. I feel like Upstate Forever is my family that helped me to keep my promise to my mother.

For her tireless and quiet dedication to secure the preservation of the historic Soapstone Baptist Church, Mable Owens Clarke is the recipient of Upstate Forever’s 2022 Marjorie E. Schmidt Stewardship Award. Our nationally-accredited land trust has been working with Ms. Clarke, conservation partners, and funding sources to permanently protect Soapstone and its surrounding acreage through a conservation easement, which should be finalized in 2022.

To learn more about Soapstone Baptist Church and the community of Liberia, visit soapstonechurch.com.