Solar and Land Use: It's Complicated

We have a complicated relationship with solar farms.

We love them because they generate clean energy at a stable price. They don’t belch smoke. They don’t leave behind ton after ton of toxic coal ash. A solar “spill” is called a sunny day. And as battery technology advances faster than anyone predicted, solar farms will soon be 24/7 operations.

But they do seem to take up more space than traditional power infrastructure. When we think of utility-scale solar farms, we think of acres and acres of panels tilted to face the sun. As the cost of solar comes down and as we become increasingly overwhelmed by the negative impacts of fossil fuel generation, we will see more solar farms in our communities.

The most common concerns voiced are that 1) solar takes up too much space and 2) it is ugly. We will tackle these in order with a case study comparing the 475 Megawatt (MW) Kings Mountain Energy Center, shown below, a natural gas combined cycle plant just over the North Carolina line along I-85, with equivalent generation in solar panels. 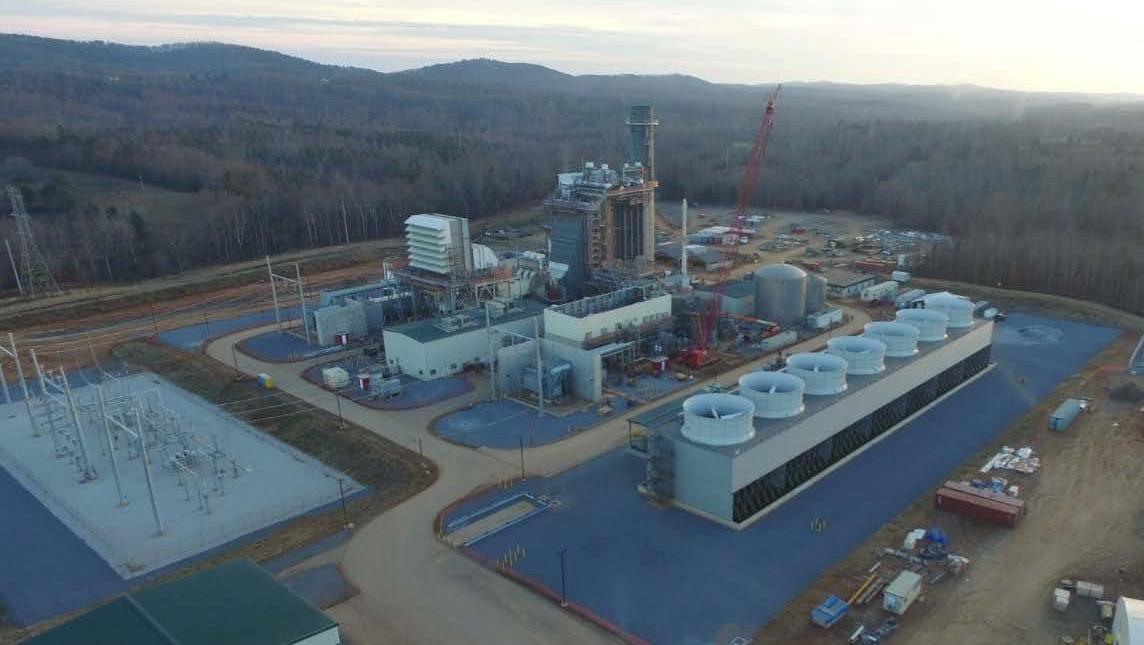 The common factor used to estimate solar land consumption is 2.5 acres per megawatt. So acreage needed to generate 475 megawatts via solar would be 1,187 acres. That sounds overwhelming. The Kings Mountain plant site is 290 acres. But is 290 acres really the total land consumption for that plant? What about the acreage consumed by the natural gas pipeline that supplies that plant? What about the massive transmission line right-of-way (ROW) acreage needed to carry that load away from the plant and to customers? Factoring these in is where land consumption figures start to even out.

The Kings Mountain plant sits very close to the Williams Transcontinental (Transco) pipeline, but if we shift that plant away from the pipeline to serve the rest of the state, we can use Dominion’s new 12" pipeline completed through the Upstate as a proxy.

That pipeline reaches from Transco in Spartanburg County and runs 55 miles down to Lake Greenwood. It has a 50 foot right-of-way that was acquired through easements with landowners faced with the threat of eminent domain. So add another 331 acres to the gas project and we're at 619 acres.

Then add 45 miles of high voltage transmission lines such as those proposed by Duke Energy in northern Spartanburg County back in 2015. That project would have entailed 200 towers with an average height of 142 feet (the equivalent of 200 14 story buildings) and a 100 foot right-of-way (but this could be as much as a 200 foot right-of-way - we're being conservative). That equates to another 546 acres (1,093 if the ROW is 200 feet). 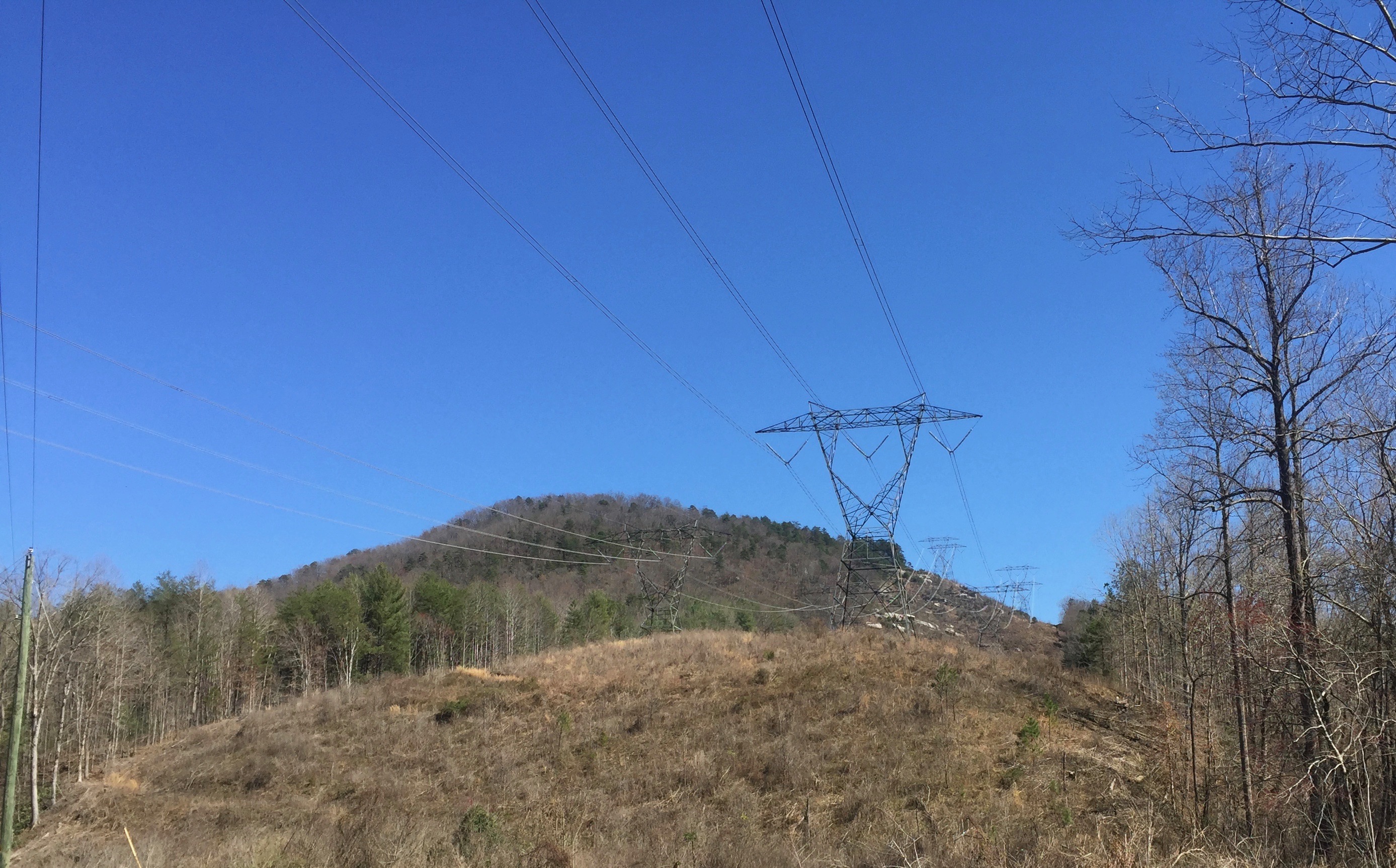 So our gas plant project easily consumes 290+331+546=1,167 acres, maybe more. We have not factored in the land consumed in the production of natural gas at the actual drilling and gathering sites in Pennsylvania and West Virginia. And if it was a coal plant (that would require a rail line rather than a pipeline), we have not factored in acreage devoted to coal ash landfill disposal or ash ponds.

Our 475 MW solar project would require 1,187.5 acres plus smaller transmission lines because, in reality, we would not build one massive 475 MW solar project in the Southeast. We simply don’t have the land for that in very many places. Because the farms would be smaller and distributed around (hence the name “distributed energy”), they would not require such large lines because the load would be smaller. They might not require new lines at all - currently, they tend to be sited where lines and sub-stations already exist. They also would not require the pipeline acreage or the drilling and production acreage. Instead, they look more like this solar farm in North Carolina: 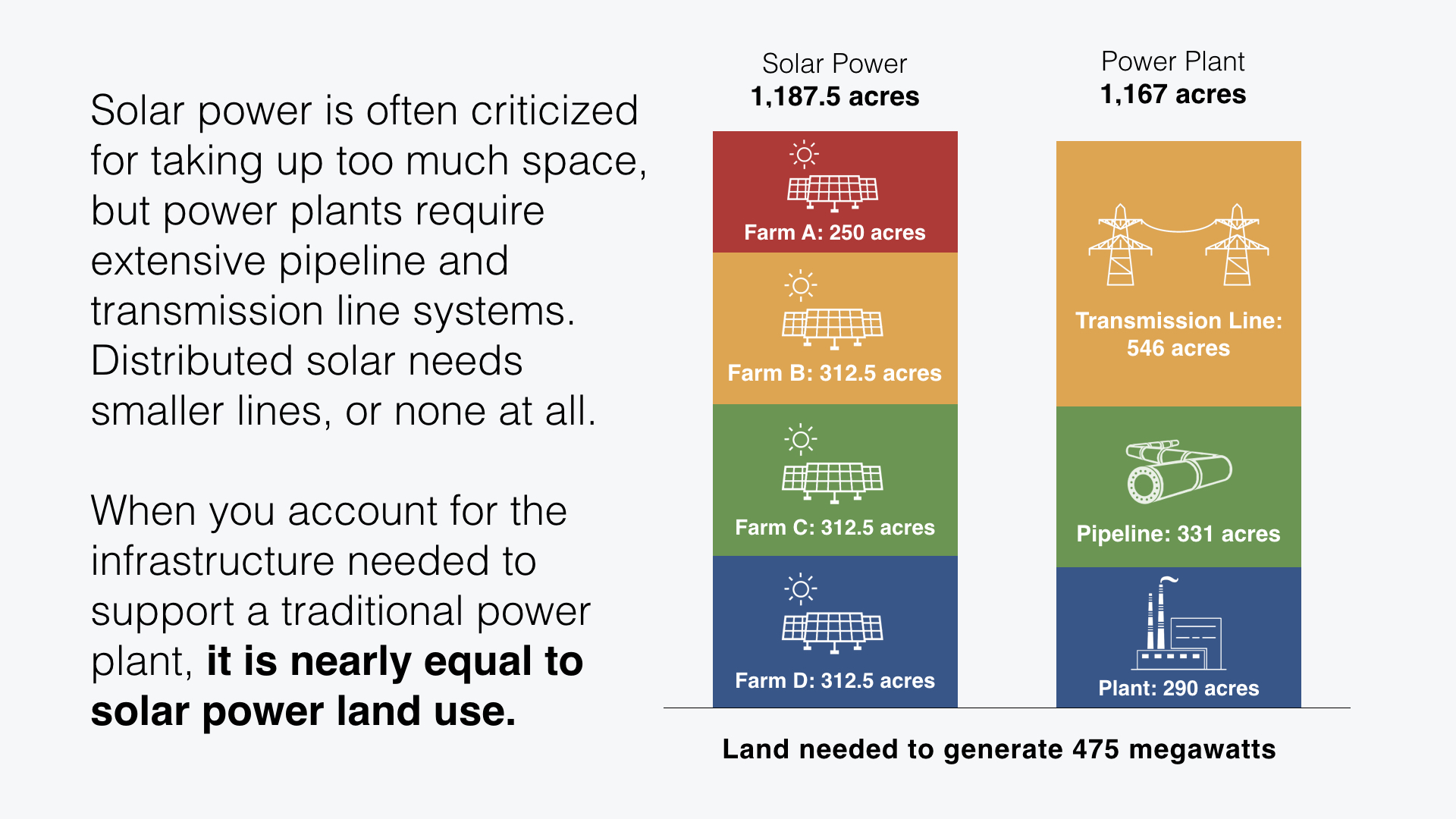 Looking at the land use needs of solar nationally, MIT studied this and compared the land area required to satisfy 100% of 2050 energy demand with solar PV to other existing land uses. Here are their results (and we converted some to acres for an easier comparison).

Solar would require 8 million acres. That sound like a lot. But coal mining today already requires 8.5 million acres. Maybe some of these acres of flattened mountain tops can be repurposed for solar farms (it's starting here). Most shocking, however, was the acreage today already devoted to producing corn strictly for ethanol - not even for livestock or people: 16 million acres. If it weren’t MIT, it would be hard to believe.

So that is a land use comparison of solar at both the micro and macro level.

But solar has additional advantages over fossil fuel: distributed energy is more efficient than centralized energy because there is less line loss in the shorter transmission distances. Line loss due to resistance in conventional long-distance transmission is estimated at a whopping 7%. There is no extractive mining for fuel (and all that encompasses, from habitat destruction to water pollution and even earthquakes), no power plant emissions, no toxic energy production waste, no noise, and the panel farms have a very low profile in the viewshed (no smokestacks or cooling towers).

Are they uglier than other land uses?

This leads us to the second argument: that some find them ugly. Granted, a solar farm isn’t a field of wildflowers. Or maybe it is. South Carolina has a new Solar Habitat program that has guidelines for how to plant native plants and flowers under and around the solar panels to attract bees and birds. Furman University has grass under its solar farm and deploys sheep to keep the grass cut. Wildflowers and sheep coexist with solar farms (whereas gas plants are just pure ugly industrial infrastructure).

In addition, we have very little zoning in the South, so a fallow field could just as easily become a housing development, a junkyard, or a distribution center as it could become a solar field. All of these are either a nuisance or add traffic and noise. Solar farms do neither. All they produce is clean energy, money for the landowner, and money for the county tax coffers (and its citizens). Solar farms are taxed at a higher level than agricultural land but do not add stress to the local road network or to the schools.

Consider these two images from along Highway 18 in North Carolina just over the state line heading toward Shelby. These two sites - a junkyard with weeds and a solar farm with newly-planted landscaping - are within a quarter mile of each other. The transmission towers for the solar farm were probably already there and were a factor in siting that farm, and county ordinances can require a visual buffer. Which would you rather see? Which is better for the county’s economy and is generating revenue for the landowner?

Finally, consider that solar farms usually remain the property of the original landowner. They tend to be leased rather than owned by the solar company. And solar farms are not permanent. If, after 25 years, the technology changes and solar is no longer the best generating option, the panels can be removed and the land converted back to agriculture or some other use. Can you imagine this being converted back to agricultural land use?

Fossil fuel generation can never claim this. And recycling and disposal rules for solar panels are currently in development, but we have some time to figure that out.

When it comes to improving carbon and pollution emissions from the power sector, we do not have time. That part is not complicated.

Shelley Robbins is the Energy & State Policy Director at Upstate Forever and can be reached at srobbins@upstateforever.org

Aerial photos taken with the assistance of SouthWings.