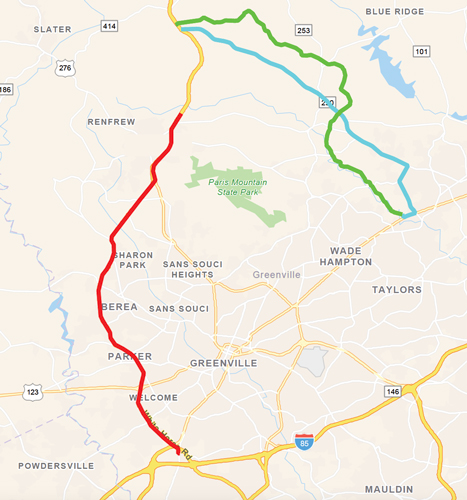 This week, Piedmont Natural Gas (PNG) announced one of three proposed routes was selected for a natural gas pipeline in Greenville County. The selected route — known as and shown on this map as the blue route — would run alongside Highway 290 from Taylors to Travelers Rest.

Upstate Forever previously expressed our opposition to the pipeline project proposed by PNG, and we were joined by citizens and fellow environmental groups.

We continue to have concerns about the selected route and lack of demonstrated need for the project.

PNG is a subsidiary of Duke Energy. Given that Lynn Good, president of Duke Energy, said that the loss from from the failed Atlantic Coast Pipeline would be recovered through PNG’s new infrastructure projects, we must question the rationale behind this pipeline.

It would also impact our most sensitive natural habitats and scenic lands, including Clear Creek Heritage Preserve, which was created by the South Carolina Department of Natural Resources with the sole purpose of protecting bunched arrowhead, one of the world’s rarest plants.

When we’re talking about a project that could have a significant impact on a community’s character and endangered species — and is a very costly project that could cost PNG’s 90,000 customers in Greenville County upwards of $75 million — we need to be certain that the project is absolutely necessary.

But right now, PNG's assessments and plans are a black box. There is no way for us to tell if what they claim about expecting an additional 44,000 customers in the county over 20 years adds up.

The company has stated that another reason for the proposed pipeline is to address vulnerabilities in PNG’s existing infrastructure from strains in the southern and urban areas of the county that affect the ability to deliver service to customers in the northern end of the county; but again, that information has not been provided.

Without more transparency, we cannot support this pipeline project in Greenville County.

WHAT CAN YOU DO TO HELP?

Email PNG and Duke Energy. Demand transparency and documentation of the need for the pipeline. Tell them the project threatens rural Greenville County’s natural resources and one of the world’s most precious plants, and that it is not wanted by local residents.