An Essay by Dr. Drew Lanham 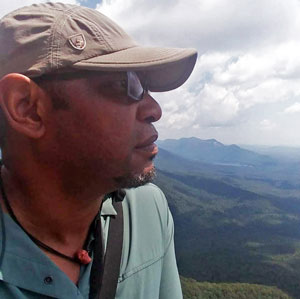 When I want a certain kind of high, I head to Caesars Head. I’m almost on top of the known world up here — at least as far as South Carolinians are concerned. At 3,215 feet, I'm a bird-watching god, lording over everything sprawled out in the valley below and Piedmont beyond. Escaping work or some other responsibility, I'm finally here!

Quickly unstrapping my seat belt, strapping on binoculars and camera, I step out of the truck and reset the gyroscope in my head after having wound up and around hairpin curves and switchbacks climbing from the Oolenoy Valley floor from Highway 11. My cell phone is in my pocket but it's for photos I'll post on social media later. Maybe I'll use it to jot a poem on as I consider my place in it all. I switch on airplane mode; I don't want to be in touch with anyone but myself up here. There are bars showing contact might be possible, but I am decisively introverted. I want to be left alone to be with other beings with no agenda other than being.

The meeting up here will be a zoom of a different sort far away from lower elevation reality. Here, or in other spaces with wildness close at hand and heart, I am not virtually apparent, I'm fully me.

The short walk from the parking lot puts me quickly on a stage that has few equals in the Palmetto State. A turkey vulture floats by on upswept "veed" wings. It is a bald-headed welcoming party of one, cruising by as if dangled from a cloud. It banks — rocks and rolls — riding the warm updrafts of thermals rising from the valley floor. The solo greeting grows in short order by several others, as birds I called "buzzards” as a child and tried to entice by playing dead to eyepecking proximity, rise to my occasion.

Along with the carrion eaters, a red-tailed hawk appears. Its rusty tail, not always seen from the lower elevations of mortal living, is a signpost I can make out from above. Soon a half dozen birds are soaring round about in a loose circling flock — a kettle. It simmers in sunlight; wind stirs the pot. My head is on a swivel for the arrow-shot form of a peregrine falcon. They breed here and are like meteors when they appear. In summer, the persistent songs of red-eyed vireos and a chorus of other songbirds — tanagers, warblers, thrushes — rise up to ring sweetly in my ears and rub the bellies of the soarers.

I stand on bare rock, feet firmly planted and gravity bound, but I feel as though I am about to ascend with the buteos in the midst of it all. It is dizzying in a not-so dangerous way to be on the edge of so much that broadens one's soul beyond human being, to think highly of wildness and what nature means to us all — not just the lofty winged and feathered, but furry-clawed, swimming-finned, slimy hidden-under-log, coiled tongue-flicking things — and two-legged thin-skinned interlopers come to find breathing room, like me.

Caesars Head is to a Midlands-born, Edgefield Piedmont rolling hills man, a promontory from which to stand on top of the Upstate South Carolina world and see whatever gods there are, evolution and humanity has both wrought — and wrecked.

On a clear day, there are vistas to take in that though not oxygenstarved by height, can yet steal a breath or two. The timber-stiff-haired hogbacks and bare faces of other mountains; the glassy calm of humancreated lakes fed by wild creeks that once knew the flash of brook trout. The creases and folds of cove and slope, hollers and hills, lie beneath view. There are grassy pastures lain to hay. There are the blacksnake ribbons of road cutting through it all; the glint of sun off of asphalt shingles on houses — more big now, than small. "Infrastructure" to make life for people easier spoils what was.

But yet, so much of my eyes fall upon the trees still outnumbering what any form of "progress" by development has brought. From bare-boned winter seasons looking down upon the skeletons of hardwoods, clotted with spots and veins of evergreen pines and the sickly hemlocks that remain, to spring's new greening and emergence of verdant hues through summer's hot humid jungle flush to autumn's senescent coloring, brushing maples to red, oaks to russet; gilding hickory yellow and leaving beech brown to hang on, I look out upon the backs of soaring redtail hawks and croaking ravens floating over what's been made better by considering nature as essential enough to fight for.

I often design these trips for my infusion of wild during the times I know others might not be able to get away. I am selfish sometimes in wanting what we all own in the ways of public land for myself. Even those critical cogs of private land that link state, federal or county patchwork properties together, become my heart-deeded possessions as I stand in awe looking outward, wondering what the Cherokee thought and saw standing where I do.

Then my mind comes forward to those following the First Nations, poor settlers looking for livable land; then curious naturalists seeking to find what western science had not described. Who were the people not native or white who first climbed up here to have freedom inspired? I think lots now about the folks with more money to burn than I'll ever make and disposable time to sidled up next to fat bank accounts, hard after buying up pieces of paradise to call their own — then lock the gates behind them.

And now there’s me, a Black bird-loving man, with red clay hills and plowed up furrows as childhood mountains, now lit on a Southern Appalachian high. These connections to this place are constantly on my mind.

I watch the circling birds drift on and wonder too, what thoughts they have. A raven croaks and I take it as good omen — one Black being to another. I whistle in poor imitation of a wood thrush who slings a song from somewhere far below. My high is a buzz of bees humming. Sourwood is blooming. A coral honeysuckle is a nectar dripping string of jewels.

I breathe deep. Hold it all in, close my eyes and see more from up here than I can see from almost anywhere else. I exhale and am fully present in this place. The Upcountry — Upstate Piedmont and sliver of mountain escarpment the first people called the "Blue Wall," is as much nurturing home place to me now as my Midland Clay country was in raising me. I'm happiest to be in it. Proud to fight for its wildness.

What was once foreboding "Dark Corner," I hope to enlighten by conservation and inclusive culture, to more enlightened and loving place. I am wanting more like me, to be selfish enough heartwise, to want others to care enough to do the same so we can share it, for those yet to come.

Save the date for ForeverGreen 2022