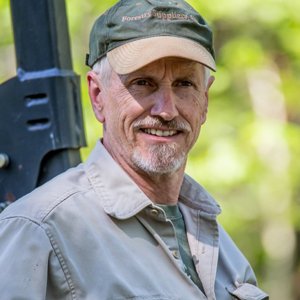 Dr. Dave Hargett hails from northern Rutherford County, North Carolina, in the foothills of the Blue Ridge Mountains. The youngest of six, he grew up in a rural, working family where farming, forest management, and caring for the land formed his conservation values.

Throughout his 31 years in South Carolina, Dave has worked extensively with grassroots conservation organizations and regional and national organizations alike to achieve thoughtful, science-based solutions and sound policies to address challenging environmental problems.

In 1999, Dave co-founded the Conestee Foundation. He conceived the strategy to undertake the insane and improbable task of transforming a long-forgotten industrial pond, a National Priorities List-caliber waste site, into the now beloved Lake Conestee Nature Preserve (LCNP). Dave was continuously involved in the “Conestee Project” from brainstorming as early as 1993, and throughout the execution of nearly two decades of technical studies of the lake and the dam, in close collaboration with SCDHEC and numerous other agencies. He has provided the critical vision to convert a forlorn and abandoned waste site into an exceptional community asset, the “Wildest Place in Greenville,” only 7 miles from downtown Greenville and now visited by over 100,000 people every year.

He served as the Executive Director of the Foundation from 2010-2020, directing the growth of the Preserve and the construction of miles of trails and numerous teaching venues. The success of LCNP is a tribute to Dave’s ability to bring together a multitude of local, state, and federal agency partners as well as a broad array of conservation collaborators for a common cause.

What is your earliest memory in nature?

I grew up spending every spare minute wandering the forests and fields of northern Rutherford County, exploring the environment, and being baptized in the “power of nature.” There was not a foot of stream or an acre of forest for miles around that I didn’t know.

What drew you to environmental science and conservation?

From my roots in the woods and wilds, I developed a keen interest in the relationships between the earth, the soil, the rocks, the water, the forests, and the wild things, but also how man could, or should, work as a steward of these natural assets. I grew naturally into conservation values by immersion.

Can you share an anecdote from the early days of the Conestee Foundation and LCNP?

Early in the conception of the “Conestee Project,” I had a conversation with Tommy Wyche to try to garner his support and blessing. He suggested that I should invest my time in other projects more ‘worthy’ of my conservation talents and passion. This exchange happened at the same time Tommy was heavily involved in negotiations for the Jocassee Gorges properties. I challenged him to come out and see Lake Conestee, and he did. Standing over the immense wetlands of the West Bay, I pointed out that Conestee provided a conservation opportunity that the Gorges project would never have, and that was over 100,000 school children within a 30-minute bus ride. He immediately acknowledged, “I get it!” After that he was wholly supportive.

What accomplishment during your tenure at LCNP are you most proud of?

Without question, the greatest accomplishment is creating a team of wonderful conservation professionals who are the caretakers and stewards of the Preserve, and who deliver nature education services to the children and families of the Upstate. The gratification from these dedicated folks is manifested in the look of astonishment on every child’s face as they see a dragonfly, or a hawk, or salamander up close for the first time.

Why is LCNP important for the Upstate?

The Preserve is located in the heart of Greenville County, and when it was annexed into the City in 2019, it actually doubled the amount of park and preserve space in the City. It offers more handicapped-accessible trails than any other park or preserve in the entire state. LCNP is the regionally- and nationally-awarded ‘poster child’ for watershed-derived Brownfield sites. The Preserve now has over 400 acres of forests, fields, and wetlands, all protected by a conservation easement held by Upstate Forever. It has over 14 miles of trails, over a mile of wetland boardwalks, a treasured nature education program reaching thousands of children each year, and 150,000 visitors annually. The Preserve is an Important Bird Area of Global Significance, a state-sanctioned Wildlife Sanctuary, an Upstate partner with Audubon of SC, and the lake and the dam are listed on the National Register of Historic Places.

Besides hopefully taking some well-deserved time off, what are your plans after stepping down from your role as Executive Director?

Time off? Is that a thing? I continue to be highly engaged in conservation work in the Upstate, protection of our streams, forests, wetlands, and wild places, and in sustaining our extraordinary Upstate environment. I also continue to be involved as a consultant on environmental assessment and restoration projects in the region. In my “time off,” I will work my certified tree farm in Rutherford County.

Save the date for ForeverGreen 2022