For her quiet, lifelong dedication to the protection of the Upstate’s greenspaces, Judy Cromwell is the recipient of the 2021 Marjorie E. Schmidt Stewardship Award. 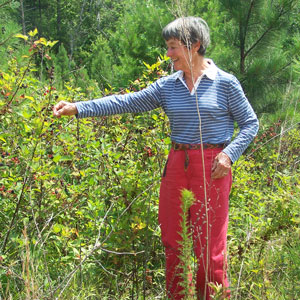 Judy Iselin Cromwell’s life has been shaped by nature.

She grew up on 20 expansive acres off Augusta Road in Greenville. There, Judy and her four siblings tended to their vegetable gardens and took care of horses, hogs, and cows. Unless it was raining, the children were expected to be outside, splashing in Brushy Creek or riding horses out to what is now Verdae Boulevard. Each Sunday, the family would pack a picnic and head for the mountains, relishing the quiet beauty of the Blue Ridge Mountains near Bald Rock and Caesars Head.

“I was constantly outside,” Judy says. “At that age, you’re not thinking about nature. You’re too young to think about it.”

But those meaningful memories would shape Judy’s path in life. After spending summers in the heat of the coast and harsh winters in New England during college, she returned home to Greenville with a renewed sense of appreciation for the Upstate’s natural splendors — and has dedicated much of her life to protecting and preserving our region’s special places since.

Judy met with the president of Furman University about the opportunity to donate six acres on the Reedy River to eventually establish Falls Park. From its inception in 1973, she worked with Naturaland Trust and founder Tommy Wyche to protect thousands of acres along the Blue Ridge Escarpment, and even blazed many of the trails in the Mountain Bridge Wilderness Area.

She was on the Board of Friends of the Reedy River when a 1996 oil spill devastated the Reedy, and banded together with the Conestee Foundation shortly thereafter to compile the lands that are now the beloved Lake Conestee Nature Preserve. Judy also worked with Upstate Forever to protect the historic home and 20 acres she grew up on off of Augusta Road, the 19th century estate of Vardry McBee, known as the “father of Greenville.”

Falls Park, the Mountain Bridge Wilderness, Lake Conestee and more — our region owes a debt of gratitude for these and many other iconic natural areas to the dedication, passion, and tenacity of Judy Cromwell.

The Marjorie E. Schmidt Award recognizes an individual who has supported Upstate Forever or has supported local conservation efforts consistently and quietly for ten years or longer without expectation of recognition or reward. The award is named after Marjorie E. Schmidt, a longtime Greenville resident with a heart for nature and a humble, giving spirit.

Thank you to our 2022 ForeverGreen Luncheon sponsors