What can Greenville learn from Charlotte? 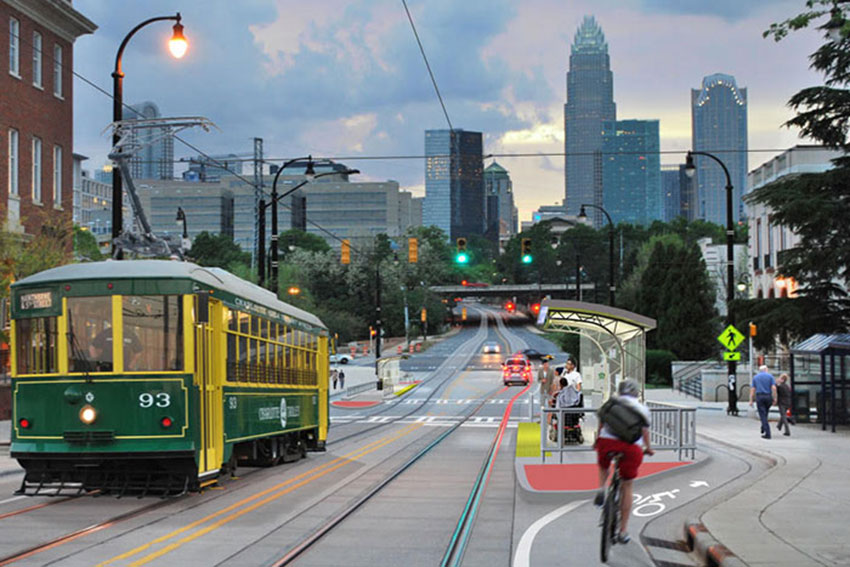 Citizens in Greenville County often look north to Charlotte and see a picture of what our area could be like in two to three decades. There are aspects of that future that many are excited to embrace, but also some that they’d rather avoid – namely high traffic congestion levels, extensive sprawl, loss of farmlands and rural areas, etc.

In fact, according to the City of Greenville’s 2009 comprehensive plan, “Greenville is running out of time for proactive solutions for traffic and transportation before congestion reaches Charlotte-like traffic.” The plan also notes, “Greenville is following in the footsteps of Atlanta and Charlotte and has the opportunity to learn from these cities how best to shape growth of the city through proper zoning regulations.”

The comparison of these two areas may come as a surprise to many, but the reality is that Greenville County’s population is of a similar size today as Mecklenburg County’s was just 30 years ago.

With that in mind, we reached out to Meg Fencil from Sustain CLT, a nonprofit whose mission is “to inspire choices that lead to healthy, equitable and vibrant communities across the Charlotte metro region for generations to come” to get her thoughts on how Greenville can best plan for the future.

Greenville County is projected to welcome another 160,000 residents by 2040. As the city and county begin planning on how best to accommodate that growth, what advice do you have for citizens concerned about how the area is growing? For elected leaders who ultimately have the authority to enact policy that shapes growth?

Now is the time to do it! Land use and transportation decisions that were made in Mecklenburg County decades ago when our population was only the size of Greenville County’s is today led to sprawling, auto-oriented growth.

The two most important ways to achieve smart growth are to have a clear vision of how the County should grow, as well as cross-sector commitment to pursuing policies, zoning, and funding to support that vision for the long term. Mecklenburg County’s population is expected to grow by 1 million people by 2030. If there’s no vision, the most likely scenario is that the current patterns of sprawl will be continued.

To prevent sprawl in both Mecklenburg and Greenville Counties, policy should support greater density along transportation corridors and in activity centers. This allows for more effective public transit, targeted investment in infrastructure for pedestrians and cyclists, and easy access to a variety of destinations including jobs, shopping, and more.

From a land use perspective, what are the most effective policy decisions Charlotte has made over the last decade to curb sprawl and retain/enhance quality of life in the region? The wisest transportation investments leaders have made?

Charlotte’s decision to replace its numerous outdated, confusing and often contradictory ordinances with a new Unified Zoning Ordinance (UDO)was a turning point for land use planning in Charlotte. Although this is a long process and auto-oriented development is still gobbling up areas that should be walkable, it’s absolutely necessary for Charlotte to have a clear and strong zoning ordinance that supports the vision.

The Charlotte Department of Transportation’s Urban Street Design Guidelines, whose principles will be incorporated into the new UDO, support all users of public streets by requiring high-quality sidewalks and bike lanes to be built on new streets. Charlotte’s City Council’s draft FY2019 city budget includes a proposed doubling of the pedestrian program budget to $30 million, and $4 million in stand-alone funding for the bicycle program for the first time since 2012.

As Charlotte has begun investing in rapid transit options like light rail and additional bike/ped infrastructure, how have they shifted land use development patterns to support those modes?

The development of residential and entertainment real estate in Charlotte’s South End area following the opening of the LYNX Blue Line light rail in 2007 has been among the most rapid response of a real estate market in the nation following a light rail line’s opening. With the opening of the Blue Line Extension in March 2018, Charlotte will soon have at least four new Transit Oriented Development (TOD) Districts as part of its new Unified Development Ordinance. The most intense district, TOD-A, is intended to encourage development that supports  increased transit usage by promoting well-integrated, mixed-use development around transit stations.

But vibrant, dense development is not just for areas around light rail lines. Regardless of the mode of transportation  -- pedestrian, cycling, or transit -- connectivity to these routes and between them should be a key consideration in transportation and land use planning.

Greenville, like many areas, is struggling with an affordable housing crisis. What innovative land use strategies have communities in the Charlotte metro region employed that have expanded housing options at affordable levels?

Growing cities of all sizes are experiencing affordable housing crises. There’s such intense market demand for housing that developers have little financial incentive to build affordable housing. Since North Carolina state law doesn’t allow municipalities to require inclusion of affordable units for private development, it’s going to require more investment to build the housing that is needed. Charlotte’s proposed city budget for FY19 includes a large increase in the Affordable Housing Trust Fund: $50 million instead of the former $15 million.

It’s important to consider that transportation is the second highest expense for most households. The median household in Mecklenburg County spends 30% of its income on housing and 23% on transportation (H&T Index). Affordable housing that’s only accessible by car doesn’t support truly affordable living.

What are the most effective actions that communities have taken to protect green space and rural areas as the Charlotte region has rapidly grown?

Sustain Charlotte and other nonprofits like Greenways for Mecklenburg are urging the County Commission to increase funding for land acquisition so we don’t lose future opportunities to build parks and greenways in critical areas. Those opportunities could be lost as the land becomes either unavailable or unaffordable. To our northeast, Cabarrus County has designated a Voluntary Agricultural District to support farming in a portion of the county.