Woodruff Road: What Worked? What Didn't?

The following was originally published in the 2017 Shaping Our Future Growth Alternatives Analysis, which included a case study series highlighting growth-related issues that Upstate communities are current grappling with and recommendations for how to address them. The case studies were authored by Nadine Bennett working with consulting firm City Explained. Learn more about the Shaping Our Future project

Whether you live in Greenville or simply visit the area from other parts of the Upstate, you are most likely familiar with Woodruff Road. With a large amount of retail development, interchanges for both I-85 and I-385 and until recently, no parallel road to divert any of the traffic, it has become to many the poster child for traffic congestion in the Upstate – and how not to grow and evolve. 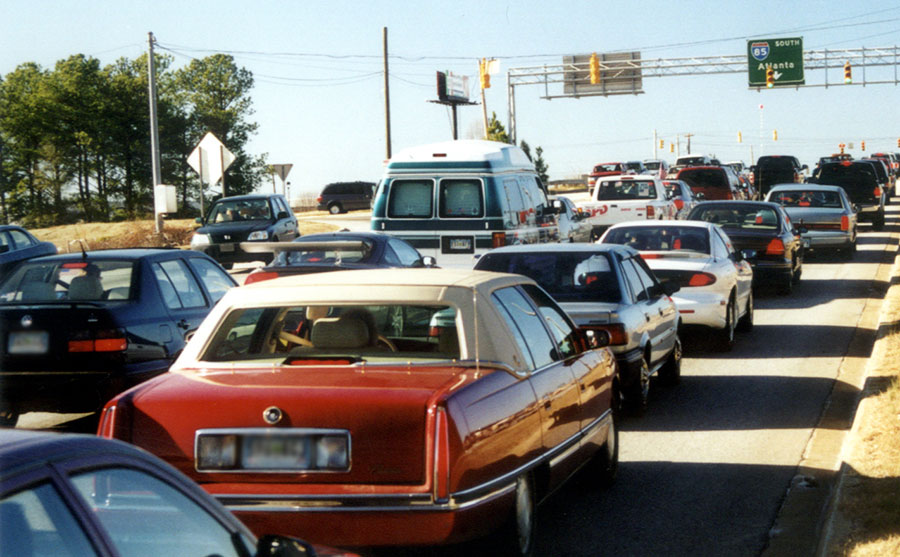 From Rural to Developed

During the transition, most of the area’s commercial development was happening along Laurens Road, west of Woodruff Road. Woodruff Road was still considered to be a residential area with a few industrial uses. However, despite the residential zoning, developers were eager to take advantage of the residential growth by providing shops and restaurants to the growing population.

In the late 1990s, Wal-Mart and Sam’s Club opened on the former site of General Electric, adjacent to I-385. Additional big box commercial developments followed, abandoning their Laurens Road locations. With the growing commercial presence, the corridor was widened from two lanes to five, and a suburban thoroughfare was born.

In 2004, a major new retail power center, The Shoppes at Greenridge, was developed between I-85 and I-385. The parcel had excellent regional access, but improvements to local access and circulation proved difficult. The addition of 500,000 square feet of retail exacerbated the traffic congestion along Woodruff.

In 2005, the Greenville Metropolitan Planning Organization (MPO), which later became the Greenville Pickens Area Transportation Study (GPATS), began putting together recommendations for the City of Greenville, including strategies for Woodruff Road. At that time, City economic development staff and planners were meeting regularly with developers. Based on the amount of commercial development being planned, MPO staff recognized that the five-lane corridor would be quickly overwhelmed by the additional traffic. In 2004, traffic volumes on Woodruff Road near Hendrix Drive were 33,500. Modeling of traffic volumes predicted annual average daily traffic counts (AADT) would increase to 45,000, which was well above capacity for the corridor.

MPO staff proposed meetings with the City of Greenville planning and economic development staff and the major developers along the corridor. They had identified a feasible route for a parallel road that would access the back sides of the Woodruff Road developments and could bring circulation improvements to the corridor.

The new road would also connect a number of dead-end culs-de-sac and provide options for local traffic to avoid Woodruff. The new road would be two lanes, with turn lanes at intersections. There would also be a two-lane bridge to fly over I-85 to continue on to Verdae Boulevard, where a large, neotraditional development was planned.

The cost estimate for the new two-lane road was projected to be $12 million. This cost did not include the purchase of right-of-way. Because the region had many other unmet needs, MPO staff felt that it was not in the region’s best interest to purchase the right-of-way (at about $15 per square foot). They believed that the developers should donate the right-of-way instead.  The majority of the developers were opposed to the proposed parallel road.

While the “Woodruff Road Parallel Route” ranked first in the region in the 2007 Long Range Transportation Plan, opposition from the developers and a lack of support from the City resulted in the project being listed in the “unmet needs” section of the plan. Traffic along the corridor continued to increase, no longer confined only to rush hour.

At the time of the 2007 study, there were more than 120 curb cuts and 17 traffic signals between Verdae Boulevard and SC 14 - a span of less than four miles. The congestion on the road had led to safety concerns for both drivers and pedestrians. The stated goals of the plan were:

The plan addressed the regional context of Woodruff Road, access management strategies, specific interchange modifications, and land use considerations. Finally, because of the goal to develop recommendations that were both functional and implementable, the report concluded with funding strategies. The recommendations in the plan, however, were not binding and many were not followed.

Of the near-term recommendations for I-85/Woodruff Road (considered at the time to be one to three years out), the only one that was immediately addressed was to extend “the monolithic concrete island at the southbound entrance ramp to prohibit through movements to the northbound loop ramp at the adjacent intersection to allow southbound left turn phasing to be upgraded to protected-permitted.”

Other I-85/Woodruff Road recommendations are being planned as part of the I-85 at I-385 Interchange project. This includes reconfiguring the northbound entrance ramp, allowing right-in, right-out access at the Shops at Greenridge, and adding a right turn lane to the existing northbound exit ramp. The I-85/I-385 project will also include signal system improvements. An “adaptive” system will record information and allow the signals to adjust to traffic needs.

The 2007 plan also addressed the idea of a parallel access road. In 2013, the project was included in the GPATS 2035 Long-Range Transportation Plan, at an estimated cost of $41.3 million - more than three times the cost of the project when initially recommended ten years prior. This is exclusive of the cost of right-of-way acquisition and is likely to change once preliminary engineering is complete.

The project is in the environmental evaluation phase. The first year of funding for the parallel road will be 2021, and the estimated completion is 2025. One of the biggest variables with timing is the schedule for right-of-way acquisition. When the parallel road was first envisioned, land costs were beginning to rise. Since that time, they have increased dramatically.

The road is envisioned as a boulevard with a center planted median and no commercial curb cuts. There is a planned 10-foot wide greenway on one side of the road, and intersections will be planned as roundabouts. The purpose of the parallel road is to draw traffic from Woodruff Road – while not becoming another Woodruff Road itself.

The City also has a short-term fix for parallel access. Piedmont Natural Gas is located on Woodruff Industrial Boulevard. When they dispatch trucks, they are currently forced on to Woodruff Road – a particular problem when they need to get somewhere in a hurry. Piedmont Natural Gas approached the City about a solution, and the plan is for a two-lane road to connect Green Heron, Woodruff Industrial, and Verdae Boulevard. $1.2 million for the project is being funded by the City of Greenville, Greenville County, and locally controlled road funds. An additional $2.1 million is coming from the private sector – partially in the form of a land donation. The City hopes to receive the additional $400,000 required from other businesses along Woodruff Road.

Greenville is also initiating a major sidewalk project along Woodruff Road. The project will involve sidewalks extending from the Shops at Greenridge to Roper Mountain Road. A concrete barrier from I-85 to Woodruff Industrial will prevent left-hand turns to the Trader Joe’s/Academy Sports shopping center.

One strategy from the 2007 plan that would have provided some of the biggest benefits is internal cross-parcel connectivity. This would have kept cars off of Woodruff Road as they moved between shopping centers. The connectivity was not required by city regulations at the time that the parcels developed, however, and would have involved retrofitting after the area was developed. The City has now begun working with private property owners to allow for connections.

The City has also not completely ruled out widening Woodruff Road, but the County is opposed, for the sake of the business owners along the corridor.

When asked what could have been done to prevent the Woodruff Road of today – and more importantly to prevent another such corridor - Greenville County’s current Transportation Planning Manager had the following recommendations:

​These comments reflect general “Best Practice” opinions and are not the official recommendations of Greenville County or GPATS.

Having good access management regulations in place prior to development is crucial to avoiding another Woodruff Road. At its most basic, access management is the practice of limiting driveway or street intersections on a road to avoid crashes and congestion. Access management techniques can be found at the Federal Highway Administration (FHWA) web page and also the Institute of Transportation Engineers. Accepted techniques include:

Ideally, good access management needs to be proactive. The key is to have the regulations and analysis in place before parcels develop. Taking a long term view of accessibility to property will help ensure future prosperity of the area. These techniques can prevent the creation of a corridor that no one wants to drive – but is seemingly unavoidable.