There are no new announcements and no meetings scheduled at the Statehouse at the moment (Sunday evening). It is unlikely there will be anything new until after April 12 at the earliest. Shortest Statehouse update ever.

But there were 250 registrants for last week's offshore drilling Conversations with Conservationists webinar! That was quite a few more than expected, and the Zoom platform couldn't handle more than 100 at that time. That problem has been fixed! There is now plenty of capacity for all upcoming webinars.

The next one will be Tuesday, March 31 at noon and it will focus on Santee Cooper and clean energy. Have you been wondering why the upcoming decisions about Santee Cooper are such a big deal? Did you know Santee Cooper is more than just power plants? Whatever happens next with Santee Cooper has significant implications for clean energy in South Carolina. When you tune in to the live event, you can ask questions.

If you missed last week's offshore drilling webinar or couldn't log in, watch the recording here. There was a last-minute surprise guest, Congressman Joe Cunningham speaking to the group live from quarantine. We truly appreciate his time, we are so appreciative that he took the quarantine seriously, and we wish him a speedy return to health.

A tentative schedule of upcoming webinars follows. The dates may be tweaked slightly and we may add some based on your input, but for now, here's the plan. Upstate Forever will be directly involved in the last two.

And before we move on to the Bills We Are Following section, which hasn't changed from last week but is here for reference, I'd like to introduce my new colleague Andy. A native of Charleston, Andy has an extensive background in hairball management that I'm sure will come in handy somehow. Andy is shown here engrossed in a Zoom discussion with the Conservation Coalition steering committee team. Welcome, Andy. 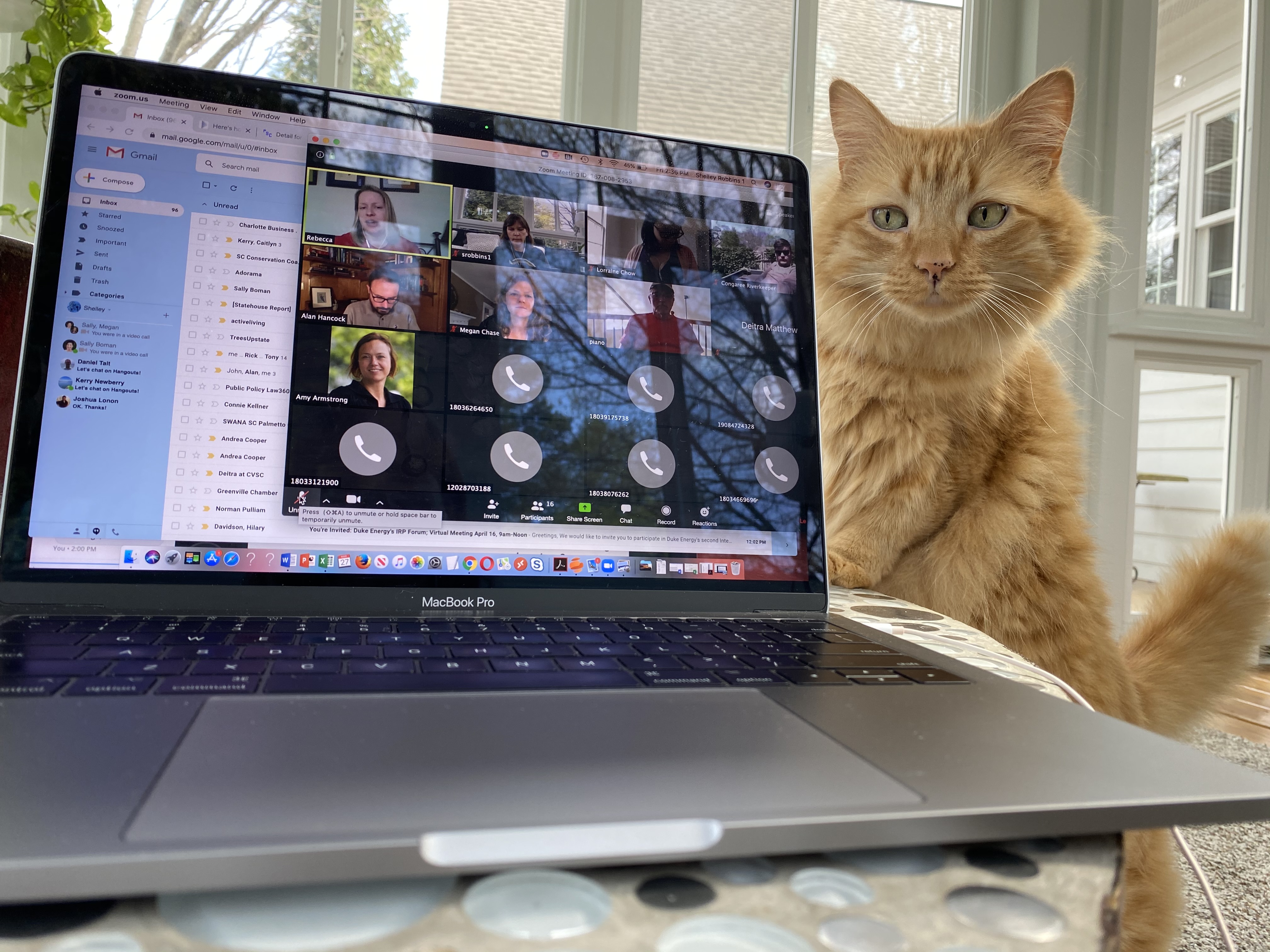 Bills We Are Following: Where They Stopped

The Black Market Wildlife Trading Bill (H. 4831, aka The Turtle Bill) passed the House, sailed through committee in the Senate and now waits on the Senate floor. Read about the details and background on the bill here. Our Department of Natural Resources needs to have the tools necessary to keep our native amphibians and reptiles from winding up as part of black market overseas trading.

Senator Sheheen's Thirty-By-Thirty Conservation Act (S. 1024) and his Organic Waste Reduction Study joint resolution (S. 1022) were both scheduled for subcommittee meetings last week, but those meetings were cancelled. Read more about both here.

A pair of House and Senate bills (H. 4718 and S. 1111) require SC DHEC to set limits on the family of perfluoroalkyl substances (known as PFAs) in our water. Read more about this issue here. They haven't moved yet. Establishing a state limit without waiting for a sluggish federal response will help impacted communities get access to resources they need, such as clean drinking water, faster. Upstate co-sponsors to date include Senators Shane Martin, Floyd Nicholson, Scott Talley, and Rex Rice and Representatives Leola Robinson, Jason Elliott, and Gary Clary.

H. 4776 which increases the time a PSC commissioner must wait after leaving office to represent a client before the PSC, passed the House and awaits a Senate Judiciary hearing. Upstate co-sponsors include Representatives Eddie Tallon, Rita Allison, Max Hyde, John McCravy, and Gary Clary.

The notorious Plastics "Ban Ban" bill S. 394 (discussed here ) is on the contested calendar on the Senate floor, where we hope it will stay.