WEEK 12 IN THE STATEHOUSE

This week was supposed to be simple. The House, having finished the Budget, was on break, leaving only one chamber to monitor. But no, it wasn't simple. A Senate Medical Affairs subcommittee took up a major amendment to S. 2, the bill filed by Upstate Senator and Senate President Harvey Peeler that breaks up and restructures the South Carolina Department of Health and Environmental Control (DHEC). Much of Upstate Forever's work will be impacted by the outcome — from our work on the State Water Plan to permit review. This is a very big deal.

Deep Dive: DHEC - Breaking Up Is Hard To Do

The number assigned to the bill — S. 2 — and the fact that it was filed by the Senate President were indicators from the beginning that this bill would be a priority in the Senate. As originally filed (and note that the link in this Legislative Update currently is the original bill and not the amendment I will be summarizing), DHEC was to have most of its environmental programs sent over to the Department of Agriculture. This was extremely problematic and a significant conflict of interest (as agricultural entities would have been promoted by and permitted by the same agency). So in some respects, the new amendment is an improvement over the original bill.

In some respects, but not all. The amendment that was taken up this past Wednesday struck all of the language in the bill and replaced it with a new plan. It was noted during the meeting that DHEC, the Department of Natural Resources (DNR) and the conservation community were not at the table when this amendment was drafted, though the concerns of the conservation community about Ag's conflict of interest were in part what led to the change. The amendment proposes to create a new, separate Cabinet agency called the Department of Environmental Services. It also proposes to move DNR's Division of Water into this new agency. The Division of Water houses the State Water Plan, among other things.

The proposed structure is shown here and is still subject to change: 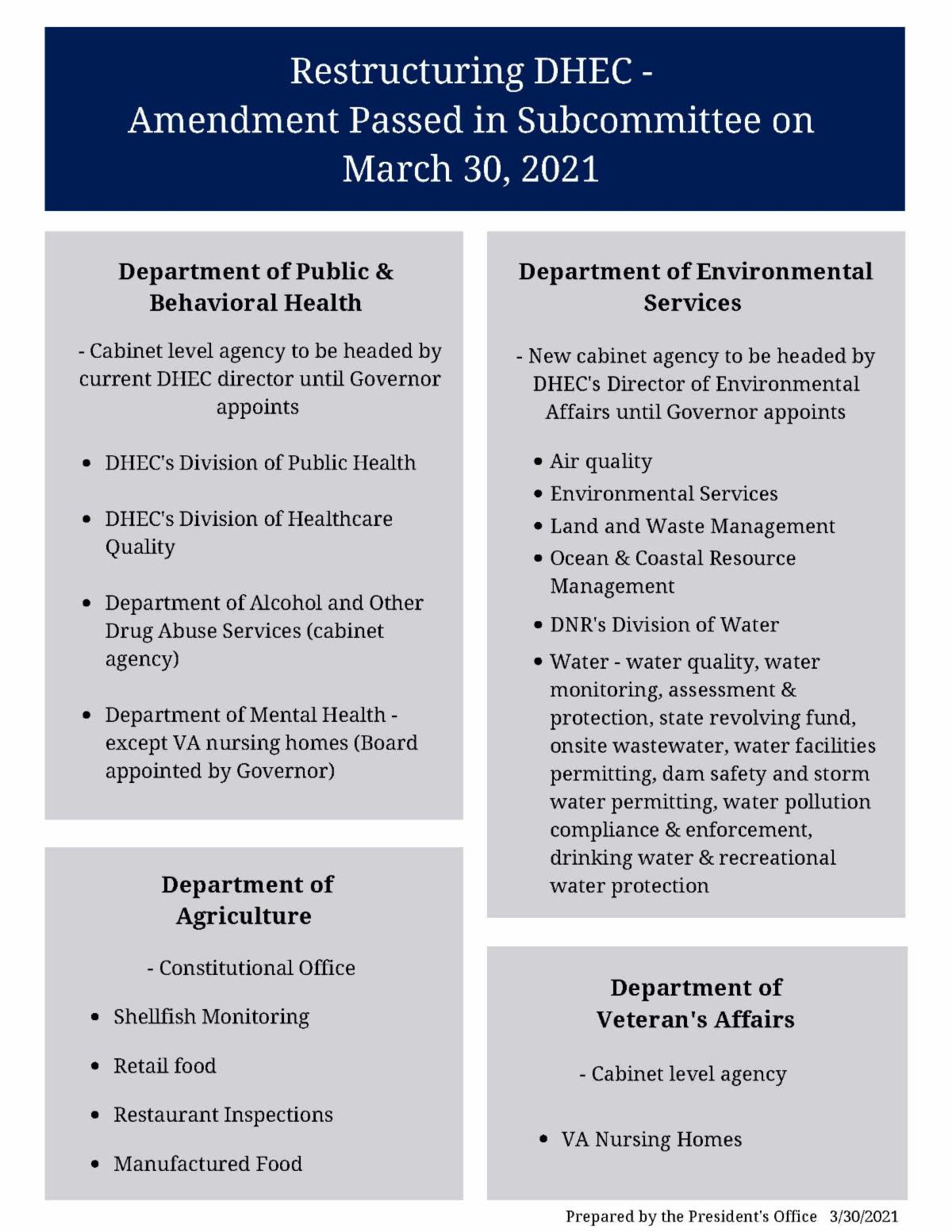 Currently, DHEC permit decisions are staff decisions that are then approved by the DHEC board to become agency decisions (or they are denied or modified by the board). The new structure eliminates the opportunity to scrutinize staff decisions at the board level and may also open the decision-making process to Executive Branch influence, but this is not yet entirely clear.

The conservation community is still analyzing the proposal, and we have additional concerns about possible changes to public input, the speed with which a permit can be issued, and other language that might weaken citizens' rights — your rights.

The subcommittee adopted the amendment but will give interested parties the opportunity to comment this coming Wednesday, April 7. You can watch last week's subcommittee meeting on the Video Archive page here. Look for the meeting held on Tuesday, March 30 at 10am - S. 2 Select Subcommittee of the Medical Affairs Committee. We will keep you updated.

Bills On the Move

The Electric Vehicle Charging Station Bill S. 304 passed the Senate on Wednesday and was sent over to the House. Thus it has beaten the April 10 crossover date and has a chance of passing this year. Read more about EVs and this bill here. And here is a great article from Utility Dive about Duke Energy's new subsidiary that focuses on converting fleets to EVs. And here is an NPR story about an electric cooperative in North Carolina that envisions how EV fleets integrate with the electric grid and recognizes the relationship between broadband access, energy burden, and electric vehicles. (These articles were in last week's update, but they're both too good to miss.)

The bill that extends the electronic waste recovery and recycling program (H. 4035 ) passed the House March 17, so it also beat the crossover date. The bill passed out of its Senate Agriculture subcommittee on Tuesday and heads to full committee. Upstate Forever supports this bill.

The liquid petroleum pipeline eminent domain bill H. 3524, profiled here, passed out of subcommittee on March 16 and full committee on March 18. It is now on the House calendar for when they return on April 6. Upstate Forever testified in favor of this bill.

Some of the language in H. 3683, the Ratepayer Protection Act, was amended into H. 4062 in full committee week before last. Most of the original provisions tightening the rules for the SC Public Service Commission, the Office of Regulatory Staff, and the Public Utilities Review Committee were dropped. What remains is language authorizing the PSC to hire independent third party experts. H. 4062 is now on the House calendar for April 6. Upstate Forever supports this bill but would like to see the rest of the protections move forward as well.

A Hearing to Watch

As of this writing, a link to the Wednesday subcommittee hearing for S. 2, the bill to break up DHEC, has not been posted, but it may be worth your time to look up the link early in the week. Go to the main Statehouse webpage, here, and look at the Senate Meeting Schedule on the right side of the page. Sometime next week, a link should appear for a Senate Medical Affairs subcommittee meeting starting 30 minutes after the Senate adjourns on Wednesday, April 7.

Santee Cooper on the Senate Floor

The full Senate Judiciary Committee passed an amended version of the Santee Cooper Reform Bill S. 464 on Wednesday, so now it hits the Senate floor this week, potentially starting Wednesday. We anticipate this bill will be accompanied by some exceptionally lively debate. Upstate Forever is agnostic on the issue of sale versus reform, but we care a great deal about the utility's future generation mix. Read more about that here. You can watch or just listen to the floor debates in both the House and the Senate on the Statehouse website or on the Statehouse app.