Every last acre on earth 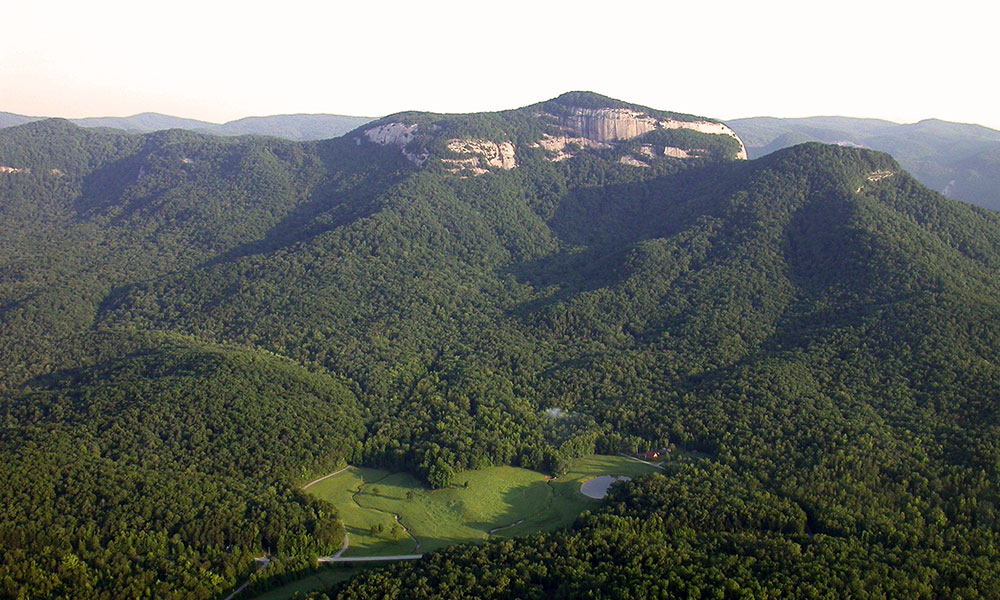 It happens to everyone at one time or another.

You hear a line in a song and you can’t get it out of your head. Or maybe you read a particularly poignant passage in a book and it just lingers in the back of your brain, sometimes for weeks or months. It could be something someone said in a casual conversation that brings a troublesome issue into sharp focus, and then it hovers in the deep recesses of your mind like an ominous storm cloud looming over the horizon.

That’s what happened to me several years ago and I can’t quit thinking about it.

We were sitting cross-legged up on top of Table Rock, that grand granite dome in the mountains of northern Pickens County, which has long been and remains one of the most prominent, most photographed and most cherished natural features in the Palmetto State.

Every time I go up there and stand on one of the exposed rock outcroppings, I am affected by a sort of ethereal feeling. There is an element of danger involved in standing on a 3,000 foot rock cliff, so it is a somewhat uneasy, yet exhilarating, feeling of being literally on top of the world, a feeling that you only get in exposed high-altitude places like that. This is what people are talking about when they refer to “sense of place.”

I was up there with my long-time friend Tommy Charles, a now-retired archeologist. We had spent the morning poking and probing around the cliffs and exposed rock outcroppings looking for ancient etchings in the stone, prehistoric petroglyphs that could well be the last vestiges of a largely unknown, undocumented people who once called this place home.

The rolling, heavily-textured, green, gray and brown patchwork lay before us like a finely detailed landscape painting by one of the grand masters, except that it was real. We could not help wonder what that same scene would have looked like back when those ebony-haired, bronze-skinned American Indians were up here pecking out their symbolic circle and oval carvings.

I told Tommy that I had been climbing Pinnacle, the adjacent mountain, for more than thirty years and it seemed that every year the signs of civilization keep creeping closer and closer to the mountain. “Over on Pinnacle,” I recall telling Tommy, “I try to get up to my favorite hunting spot before first light, right at the break of dawn.” According to family tradition, it is also the place my great-grandfather, “Big Ab” Chastain, hunted when he was a young man.

The spot up near the top of the mountain that we both chose as our favorite hunting lair is a relatively flat, boulder-strewn patch of woods enclosed by steep cliffs and ridges. I call it very simply, The Pretty Place.

Part of the appeal of standing there amidst the natural beauty of that little sanctified spot of hardwood forest is that it provides a treasured link between me and my great-grandfather, whom I never knew, but nevertheless consider a kindred spirit. 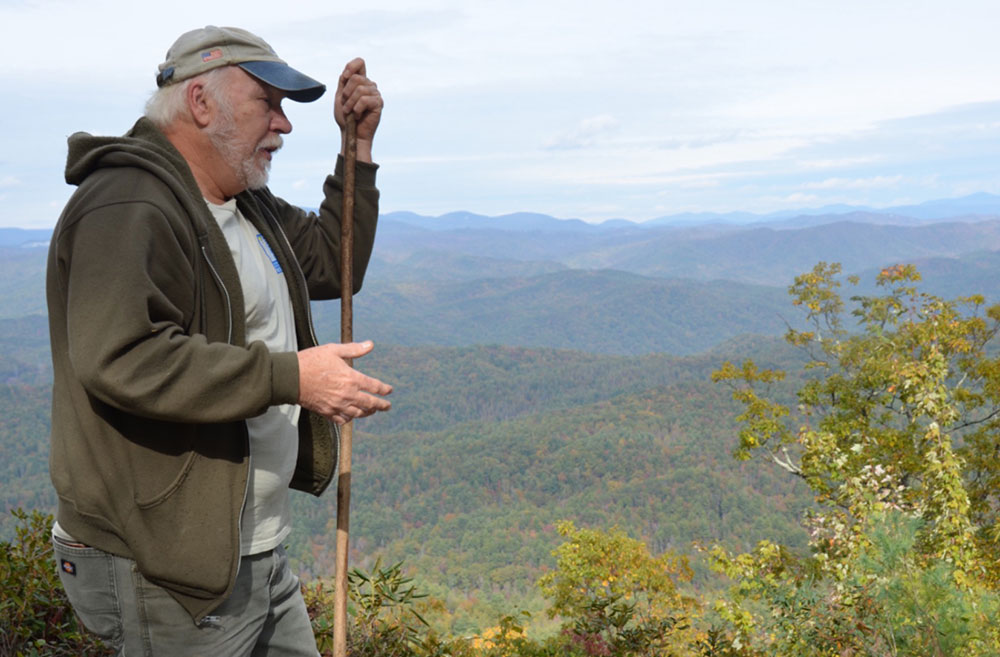 Every time I go up there, in the last predawn minutes before the glowing sun peeks up from the distant horizon casting its bold white light on the landscape, I take a moment to turn around and look through the dark woods to the East where I can see the lights in the tallest buildings in downtown Greenville, along with the twinkling street lights of the various communities, neighborhoods and housing developments of Berea, Easley, Dacusville and Pickens.

“I guess if I live long enough,” I said somewhat wistfully, “those lights will eventually be right up here at the foot of the mountain where my ancestors have been living in scattered cabins and homesteads for two hundred years. It breaks my heart.”

Tommy was surprisingly silent for a moment as if maybe he had not heard me or was thinking about something else, but then, staring straight off toward the distant horizon, he posed the question that still haunts me, “Are we just going to develop every last acre on earth?”

The reason that otherwise unremarkable question haunts me is the fact that I don’t know the answer.

And because I don’t know the answer, I have to wonder; Are there any real limits on development, the conversion of open rural spaces and wild lands into housing developments, gated communities, commercial districts and industrial sites? Who knows?

Maybe there really are no limits on growth. Maybe we really will eventually develop every last acre on earth; maybe not in my lifetime, but eventually. That prospect haunts me, scares me beyond comprehension, and drives me to distraction.

Someone please tell me that I am missing something and there are real hard and fast limits on just how much growth this planet can absorb and that there is an end point out there somewhere when we will collectively say, “Okay, that’s enough. We’ve made enough money and we enjoy a lifestyle that our ancestors could not have imagined. Why can’t we stop focusing so much on growing the economy and focus more on growing our collective quality of life? Why can’t we spend more time and effort in slowing the ever-increasing growth in the world’s population? Why can’t we learn to focus more on enjoying what we have and stop consuming more and more of everything, and gobbling up more and more wild acres and converting them into something else?”

I have looked everywhere for the definitive answer. I have scoured the scholarly journals, I have asked the experts, and I have focused the diverse knowledge attained in my lifetime toward answering this simple question; all to no avail.

Here is what I know. I know that development is directly related to growth and nothing in nature grows forever. Everything in nature has built-in limits on how much it can grow; otherwise, ants would grow to the size of skyscrapers and would rule the earth.

Sadly, however, the rules of nature don’t apply here. They tell me that continuing to grow is essential to our modern way of life. Every time the economy, here or abroad, stumbles and drops back a tenth of a point, economists start wringing their hands worrying whether people will spend more money on this Black Friday than they did last year.

I am told that we are a consumer-driven economy and we need to keep growing and producing more people to buy more stuff, so other people can make more money. If I don’t know anything else, I know for a fact that money trumps everything. Then someone will eventually come along proclaiming they have a plan to get the economy back up and growing again. This reassures the folks in green eyeshades, and we comfortably go on about our business all the while; growing and growing, and then growing some more. I see it every day, everywhere I go.

Some time ago, I was asked to go over to the local elementary school and talk to the students about urban sprawl. The teacher was having a hard time explaining the concept to ten-year-old minds. I drew a big circle on the blackboard. “This circle,” I instructed the eager students, “represents a town or a city.” I went on to explain that for 200 years, as towns and cities inevitably grew, they traditionally expanded from the center out.

Drawing another slightly larger circle just outside the first, I explained that this new circle represents the growth that used to take place from the center of the city outward, in a relatively slow and predictable way. Then I drew another circle outside that one. Like the rings in a tree, each ring represented another period of growth.

Then, some distance from the concentric circles, I drew a smaller a circle. “This is what happens now,” I advised the silent wide-eyed class, “This is urban sprawl.”

“These days the growth tends to leapfrog from the existing urban center way out into the countryside,” I instructed, “usually because someone decides to build a new school out in a rural area, typically because the local school board can’t afford the high-priced municipal land, or maybe some enterprising developer gets a good deal on a large desirable tract of farmland or wild woodland. Then the municipality is more than happy to build new roads or improve the existing ones, along with installing the required water and sewer, and to expand its corporate limits and thereby increase its tax base. Then other developers rush in to fill in the gaps back toward the core of the original municipality, taking advantage of the newly installed infrastructure and amenities in the formerly rural area.”

The point of all this was that while growth has historically been relatively slow, regular, planned and predictable, it is now rapid, episodic, largely unplanned and almost totally unpredictable. This unfortunate turn of events means that we are now gobbling up thousands of acres of farmlands and woodlands each day with little time to react, little time to do adequate planning to accommodate the new land use paradigm.

And for those of us who cherish the charming rural landscape, and the woods and wild places, our world has once again shrunk before our very eyes.

Apparently they got it. One astute young fellow, who had hunched forward and scooted to the edge of his seat, scarcely waited for me to finish speaking when he cried out, “Mr. Chastain, where are the wildlife going to live?”

Where are the wildlife going to live, indeed? And where are we humans going to go to seek solitude, to recharge our batteries, or maybe just to marvel at the wonder and splendor of the natural world, and restore our city-weary souls? Where are we going to go, indeed? And I am left wondering, are we just going to develop every last acre on earth?

Dennis Chastain is an award-winning outdoor writer, historian, tour guide and interpretive naturalist. He is also the recipient of the Extraordinary Achievement Award at the 2019 ForeverGreen Luncheon.