What do a native grasses fanatic and a livestock farmer have in common? For Laurens County residents Chad Culbertson and Patrick Jackson, their common ground was rooted in a desire to farm their land while restoring soil and fields that were barren from years of modern farming techniques. What developed is a system of restorative grazing that not only increases carbon sequestration and water retention (two significant measures of healthy soil), but also improves crop yields, even during severe droughts, which have become more and more common for farmers in the Upstate.

Patrick, whose family owns a farm just down the street from the Culbertsons, had never heard of a conservation easement before. Eventually, he heard that his neighbors were permanently protecting their property as he knew that their area of Laurens County was in deep need of land protection. He wanted to hear more about this option for land conservation. Patrick saw farmland increasingly being turned into development properties. "Somehow we got talking about native grasses," says Patrick, "and that got me interested in putting my own property into a conservation easement." Thus, the partnership began.

After Chad's family granted the conservation easement, Chad started to think of ways that he could make money while supporting conservation values like protecting water and soil quality — the reasons they protected the property in the first place. Hay production and grazing stood out to him. When Chad discovered that native grasses made good hay for grazing, and also made soil healthier, he knew he'd found a solution.

"The thing that people really make a mistake on," says Chad, "is they think they are farming beans or corn or wheat or cattle, but what they are really farming is soil and they don't know it."

Soon after, Chad and Patrick developed a business partnership. Patrick grazes his Hereford cows on the Culbertson's land and Chad introduces native grasses to the system.

Chad and Patrick have observed that years of soil depletion from modern farming methods can be reversed through planting native grasses and cattle grazing. Cattle and native grasses go hand and hand with soil health.

"The cattle are almost like a probiotic for the soil," says Patrick. "They inoculate it with their saliva, urine, and feces, and they feed the soil by trampling stuff." 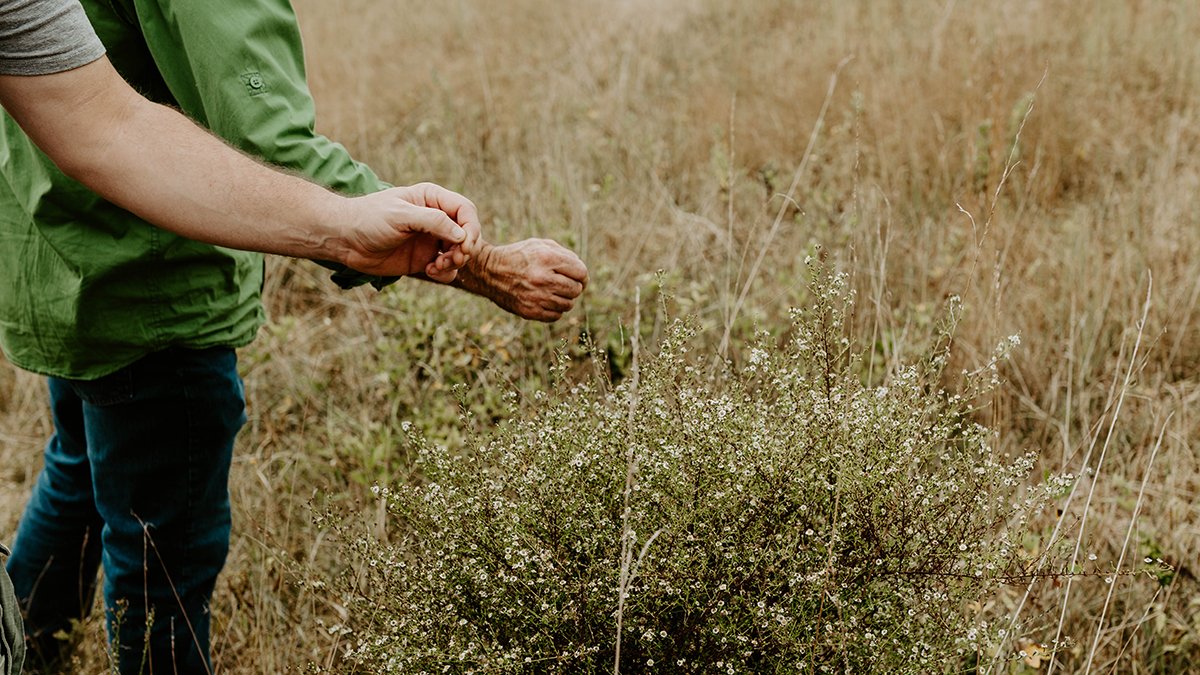 While building up soil and diversifying native grass species, the land also begins to build an incredibly resilient network of root systems that prove vital for farmers during periods of drought. Native grasses increase surface area, allowing water to be taken up when needed.

On Patrick's family farm — Pompey's Rest Farm — the soil carbon content has doubled, leading to about 5-6 tons per acre as a result of keeping their cows on a rotational grazing system and planting cover crops.

The size of the root mass enables the roots to store more water than their non-native counterparts. More roots create more surface area to tap into ground water during times of drought. Chad has even found that reintroduction of native grasses on pasture has made springs flow again. A similar occurence happened in places like the Texas Hill Country where residents have replaced Juniper and planted native grasses instead.

Patrick is already seeing savings in reduced fertilizer expense and a reduced need for water during periods of drought.

The partnership has been a great way for Chad and Patrick to offset the pitfalls that are inevitable in any farming operation. "There's leaks in the financials of an agricultural system, and when you can partner with somebody else the leaks are shared. Neither one of you absorbs all of it," says Chad. It works out well in the short term as well as the long term.

Patrick and Chad focus their passion of farming on the soil, rather than the marketed product. This rethinking of how to manage grazing lands was motivated by farming with conservation values at the forefront. Although they value putting the ecology of the pasture above market demands, they also happened to create a more resilient environment to create greater products. They have also discovered that they can meet those demands with fewer inputs and greater ease. They are building an insurance policy into the soil.

Want to introduce native grasses to your grazing system? Here are a few to consider:

Gamagrass is excellent to use for hay production. This is a tall, perennial, warm-season grass that can be harvested more than once during the growing season at about six-week intervals.

Caitlyn Gendusa is a Land Conservation Specialist with Upstate Forever. You can contact her at cgendusa@upstateforever.org.